Music Pick Of The Week: Durand Bernarr- "8ight: The Stepson of Erykah Badu" 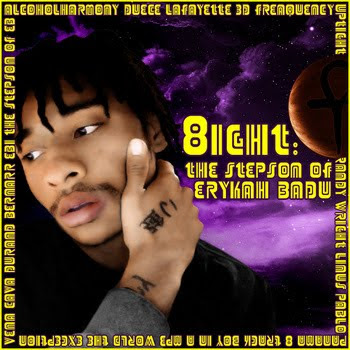 One of the most slept on mixtapes on the 'net, in my opinion.
This tribute to Erykah Badu needs listening to because this, and his previous mixtape "Alcohol Harmony",  shows the vocalist fearlessly approaching tracks with such vulnerability that almost says: "please listen to me, all of me". The best example of this approach, in my opinion, is "Se7en" (which is ironically track #6). The track, a remake of "Prototype" by OutKast's Andre 3000, almost aches with vulnerability. While it's only about 2 minutes long consisting of mainly the chorus, the backdrop (particularly the track and chord structure) of the remake and the vocal delivery and arrangement for some reason keeps having me go back to it. Stunning.
Another standout is the arrangement of "CitricCypher". Sung over the instrumental of "Nag Champa (Afrodisiac for the World" by Common (produced by J. Dilla), this joint is a nod to various R&B/jazz joints ("Sugar Free", "Chasing Pavements", "Everybody Loves The Sunshine"). In fact this whole album is a tribute to a LOT of R&B/Jazz influences... even a nod to Prince that y'all are just gonna have to figure out to appreciate.
Most of all, I love the rookie approach, as it was done solely on Garageband on a Macbook and has a true "mixtape" feel to it,  and complete "I don't give a f***" attitude to Durand's arrangements and vocals. His interesting use of backing tracks for his mixtape is also notable... y'all are gonna have to listen to believe.
Cop the mixtape below, or visit Durand's official music page at durandbernarr.bandcamp.com. You can follow him on Twitter @AlcoholHarmony.