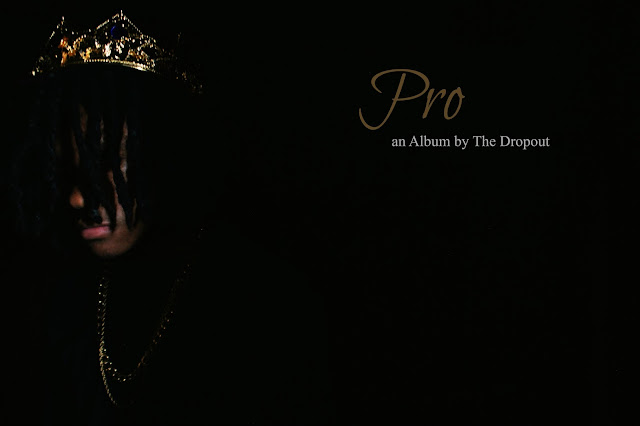 I'd first heard of Memphis' own The Dropout via his collaboration on B.Slade's latest release, the free mixtape "The Black Belt". The Dropout blessed the track "Black Lives Matter (Memphis)" with a hot 16 and not long after that, Dropout reached out to me to take an early listen to his upcoming album, "Pro", which drops this Monday, May 1st.
I haven't done a music review in ages, for a variety of reasons, mostly due to time restraints and my inbox being flooded with submissions but this was an exception that made me stop in my tracks.
It's not too often that you hear a rapper nowadays that is just as adept behind the boards as they are behind the mic. In my experience, with few exceptions that come to mind, either the flow or the tracks outweigh one another, for whatever reason - sometimes due to the necessity of being an indie artist. This album is not the case.
Entirely produced by The Dropout himself, he flows effortlessly over his own tracks, giving shine to collaborators Mezzy Mack (Dropout's brother), Christina (on the radio-ready "Daytime"), Peco, King Cord and Lauren Laux.  First off, can I just tell you how much I appreciated and went a little geeked out how "Fly Way" led into "Little Lady"??? Other standout tracks that are, in my opinion, club and radio ready (albeit with a few "radio edits)  are "Go" - which I had on repeat 3 times and the darkly simplistic "These Walls" with its experimental shuffle almost made me throw something. "Weekend"  has an infectious hook with a crazy piano riff accentuated with ridiculously sick drum programming.  The way the album closes with "Until Next Time" is the perfect introspective come-down from the extensive turnup you get from the album.
"Pro" was refreshing in the cohesive way it bridged the gap between rapper and producer - because, with all of his prowess in production, Dropout has BARZ.
This album from the one-man powerhouse known as The Dropout is one that I can easily say I replayed this album at least 10 times just to let it marinate, but I enjoyed doing so
(and I'm not even a fan of most trap-style music).
Do yourself a favor and preorder "Pro" on iTunes HERE or cop the album when it drops on May 1st via all digital music retailers and subscription providers.
Check out the visual from one of the songs, "KOS" (featuring King Cord) below and go check out his website to follow him through all social media outlets at theonlydropout.com.
Tell him J'Fuzion™ sent you.