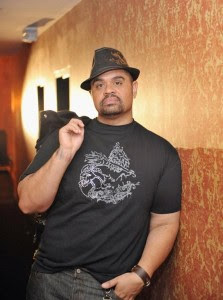 Heavy D, one of the most influential rappers of all time, died today after being found unconscious in front of his home in Beverly Hills.
No official cause has been determined.  At about noon (PST), Hev was found in front of his home unconscious. Paramedics were called, and on the way to the hospital, reports say he was conscious and speaking. He died an hour later in the hospital.
Heavy D first saw fame in the late 80's and early 90's as part of a group, Heavy D & The Boyz, whose hits "Now That We Found Love", "The Overweight Lover's In The House", "Somebody For Me", "Nuttin' But Love", and my personal favorite "Got Me Waiting (Remix)".
Hev also worked with both Janet AND Michael Jackson ("Alright" and "Jam", respectively)
and starred in the television show "Roc" in the early 90's.
Hev's last performance was at the BET Hip-Hop Awards in October.
Heavy D was only 44 years old.
We wish you a Peaceful Journey, Hev.
UPDATE: Conflicting unconfirmed reports say that Hev either passed from a sudden massive stroke, heart attack, or complications from pneumonia. More info will be released as soon
as it's confirmed.