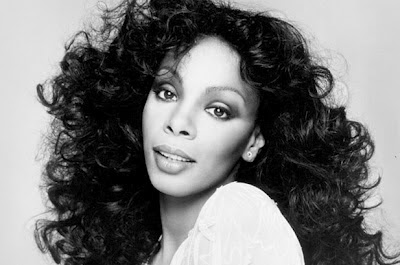 Donna Summer, the undisputed Queen Of Disco, died earlier today
after a long, quiet battle with lung cancer, which she believed was brought
on from living in New York City during 9/11 and the debris and chemicals
that lingered in the air around Ground Zero.
Ms. Summer, born LaDonna Adrian Gaines, , was a 5-time Grammy winner who Summer was the first artist to have three consecutive double albums reach number one on the U.S. Billboard charts.
Ms. Summer was 63 years old.
Of all the songs I LOVE of Donna Summer's, the one that COMPLETELY floors me was a little song that was produced by Quincy Jones, one that was a foreshadower of Quincy's production on "We Are The World".
It was a remake of a song by Jon & Vangelis called "State Of Independence".
The amazing thing about this song that singing BACKUP were Michael Jackson, Stevie WOnder, Dionne Warwick, Lionel Richie, Michael McDonald, Kenny Loggins and others.
Check out the quick making-of clip of this masterpiece, followed by the completed track.
Rest eternally, Donna Summer.