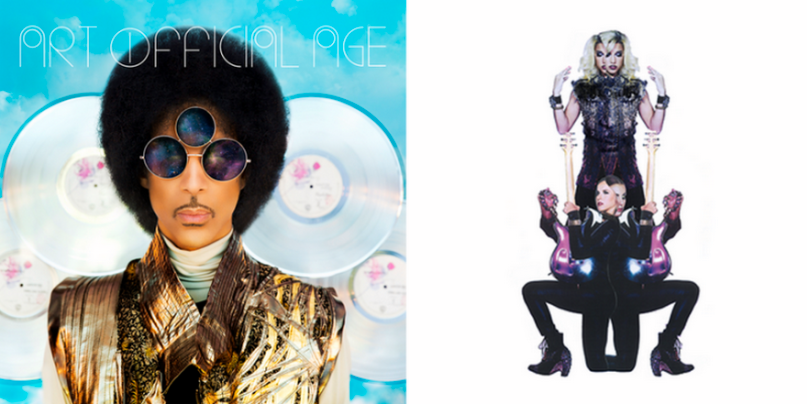 PRINCE has released his 2- album return to Warner Brothers, "Art Official Age", a solo Future-Funk release that is already being hailed by reviews as his best work in decades,
and "PLECTRUMELECTRUM", a collaborative effort of Funk/Rock with his all female trio,
3RDEYEGIRL.
I will say this, and I'm still digesting both albums as I received them a few days early via Warners:
"Art Official Age" is easily his best cohesive project in years, not withstanding maybe the rock album "LotusFlow3r", which was one disc out of a trio-set that stays
on my playlist well after its 2009 release.
Joshua Welton, the co-producer of "Art Official Age"
(Prince's first official co-producer on any album) has managed to help create a sonic landscape
on this album that some are calling the "new Lovesexy"... and, I can't really argue with that.
There are no real "standouts" for me, because I'm hearing it as a full piece, although "The Gold Standard", "Way Back Home", "Time" and the previously-released singles from the project, "Breakdown", "Clouds", and "U Know" are dope on their own.
Guest artists Delilah, Lianne La Havas, (who serves as a guide throughout the project with "affirmations" and vocals on at least one track), and previous collaborator Andy Allo add
great contributions to the album

"PLECTRUMELECTRUM" on the other hand is essentially an indie garage band funk/rock stomper,
recorded live with one-take sessions in analog.
With lead vocals shared between Prince and 3RDEYEGIRL drummer Hannah Ford-Welton,
(whose husband helped helm "AOA" and duets with his wife on "STOPTHISTRAIN"),
this album offers a cover of Alice Smith's
"Another Love", turned into a slow-churning blues stomper, "TICTATOE", my favorite track off the album that was reportedly inspired by the Cocteau Twins, as well as his own version of
Liv Warfield's "The Unexpected", which Prince  wrote and on this album appears as the opening track  "WOW".
Other songs include the previously-released singles, "FIXURLIFEUP", "PRETZELBODYLOGIC", and the new single "FUNKNROLL", which also appears as a Joshua Welton remix on "AOA".
The title track is an instrumental piece written by 3RDEYEGIRL guitarist Donna Grantis, who previously released the song under the name "Elektra".
Add to that Hannah's ferocious drumming, Donna's Zepplin-esque chops on guitar and
bassist Ida Nielsen, who slays throughout and especially on the track "BOYTROUBLE",
and it makes for an entertaining and impressive debut release from 3RDEYEGIRL.

Overall, both albums offer 2 very different testaments to Prince's legacy as a musician, songwriter,
and arguably the best live performer alive.
Do yourself a favor and cop both albums, available EVERYWHERE now.
You'll be glad you did.
Now... about that Purple Rain expanded remastered set coming up...