Gaming software maker has acquired permission from The Michael Jackson Estate to create a dancing/karaoke video game, which is slated to be released before Christmas on XBox 360 and PS3.
Dope!
Here's a screenshot, provided by Ubisoft, via AP. 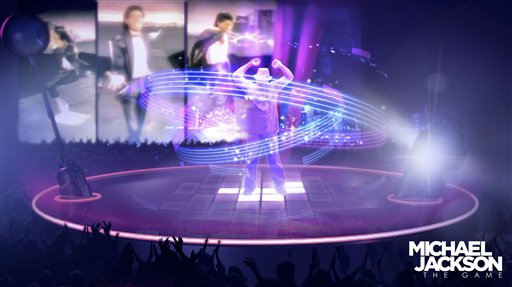 Here's what the AP had to say:

"Gamers will have the opportunity to moonwalk alongside The King of Pop.

Video game developer Ubisoft announced Monday it would release a new dancing-and-singing game featuring Michael Jackson this holiday season. The as-yet-unnamed game will be among the first to use Kinect and Move, the respective motion-detecting camera systems for Microsoft's Xbox 360 and Sony's PlayStation 3 due out later this year.
"Your goal is to dance like Michael," said Tony Key, Ubisoft's marketing vice president. "Do what the guy on the screen is doing and you're there. It'll score you based on the quality of your performance."
The game's launch will roughly coincide with the November debut of a new album containing unreleased Jackson recordings. Versions of the game, which will feature songs from Jackson's catalog, including "Billie Jean" and "Beat It," will also be available for Nintendo's Wii and the Nintendo DS and PlayStation Portable handheld consoles.
The announcement was made during Ubisoft's Electronic Entertainment Expo press conference at the Los Angeles Theater. No footage from the game was shown, but dancers from Jackson's "This Is It" tour took to the stage to perform a routine set to "Beat It" at the conclusion of Monday's event.
"With the technology that is available today, you will be able to learn how to be as good as those guys are and even better," said Yves Guillemot, Ubisoft's CEO.
It won't be Jackson's first appearance in a game. He starred in 1989's action game "Michael Jackson's Moonwalker."
Ubisoft has already found the right moves with the dancing game genre. The game maker's "Just Dance," released for the Wii last year, has sold more than 3 million copies worldwide.
"Rock Band" developers Harmonix are also choreographing their own dancing title, unveiled at Microsoft's press conference Monday with a routine set to Gwen Stefani's "Keep On Dancing." "Dance Central" uses Kinect to detect players' movements and translate them to a flashy avatar on screen."