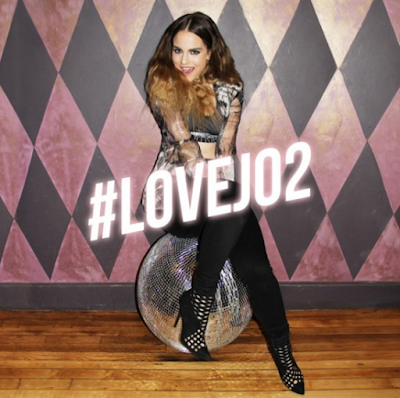 New music from JoJo is always welcome here! This time, a a new  EP, "#LOVEJO2", a sequel to last year's EP,  "#LOVEJO", which featured her covers of songs from Anita Baker and Genesis.

This EP is a mixture of new songs with nods to other classics. For example, the opening track "Right On Time" gives a nice nod in its chord structure and bridge to Donna Lewis' 1996 classic      "I Love You Always Forever". The  EP also includes a club remake of "Back To Life", the classic 90's club song from Soul II Soul which most most notably featured (in its acapella remix form) over the opening credits to the cult hip-hop classic movie, "Belly". Next is a re-recorded remix of her track "When Love Hurts" from "III" (pronounced "Tringle"), her recently-released official extended-play single. This version is slowed down to a trap beat and gives a quick reference to Mary J. Blige's classic first single, 1992's "Real Love". .
Also of note is the closing track, "Thinkin' Out Loud", which was first heard as an lowkey interlude of sorts on her underground  2012 classic mixtape, "Agape" (which also, by the way, featured an amazing cover of  Joni Mitchell's classic "A Free Man In Paris"
from Joni's 1973 "Court & Spark" album).
All in all, this is a very well-rounded EP and I've pretty much had it on replay for a while.
Check out the entire"#LOVEJO2" above and let her know I sent you!
Labels: EP ILOVEJO2 JoJo New Music