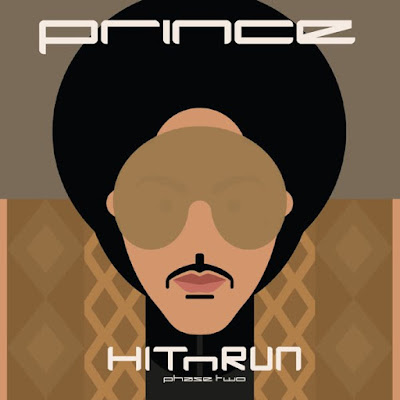 Prince has released a surprise brand new album, overnight, exclusively on Tidal.
"HitNRun Phase Two" is a return to basics, a distinctly different album sonically, than this year's "HITnRUN Phase One", due to the very organic  funk, rock and soul live instrumentation.
Although some, like me, copped some of these songs when they were available through his website 3rdeyetunes.com and Tidal, it's great to hear a few of them in their final, tweaked form.
From one of the first inklings of this album, the single "Stare", there was a hint that Prince would be returning back from his experimental EDM/Pop ventures in "Phase One"
and last year's "Art Official Age", a move welcomed by some of his  fans.
Of note, for me, is the song "Revelation", which some fans heard back during last year's  Yahoo Livecast album release party for "Art Offiial Age" and its companion album with his then rock trio, 3rdEyeGirl, "PLECTRUMELECTRUM". The slow burn of "Revelation", with amazing sax work from NPG Horns member Marcus Anderson, is sexy and stunning.
Also included on the album, the song "Baltimore", a social commentary on the (alleged) murder of Freddie Gray, "Groovy Potential" (which was a 3rdeyetunes exclusive until now), along with the previously reworked "Xtralovable", originally recorded in 1982 after  the "1999" sessions.
All of the previously released songs, save for "Stare", "Baltimore" have been
tweaked in some way or another, making them cohesive for the album listening experience.
You can buy the album, along with "Phase One" as a bundled package,
as of now exclusively on Tidal HERE.
Negotiations are underway for other distribution methods, according to Prince's twitter feed.