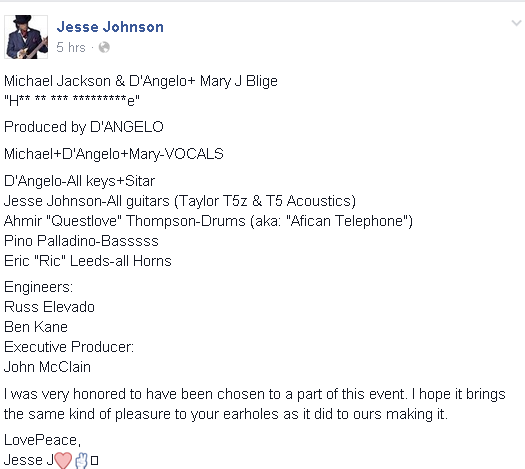 Jesse "Jellybean" Johnson, best known as legendary guitarist for The Time as
well as D'Angelo's recent tour and recording sessions,
just posted this bombshell of information.
No word yet on whether or not this collaboration will be featured on MJ's upcoming
"Xscape" album, but judging by the Executive Producer credit, it looks like it will be.
Either way... I'm floored and CANNOT wait. Just look at the list of musicians!
UPDATE 4/2/2014: The song has been revealed to be a cover of Sly & The Family Stone's classic
"Hot Fun In The Summertime", which MJ owned the publishing rights to.
This should be GOOD.
UPDATE: 5/13/2014: The song seems to have been mysteriously pulled from the album release without any comments from Sony.No word yet on any possible release of the song.
Labels: D'Angelo Eric Leeds Mary J. Blige Michael Jackson MJXscape New Music Questlove